Last night, during a casual Facebook conversation, Nick Devlin mentioned to me that he was trying to find video of the most recent Justin Upton home run because he heard it traveled “like a billion feet”. Obviously, that’s way too many feet (howmanyaltuves.com tells me it’s north of 184 million Altuves). But this got me thinking: if Justin Upton were to hit a ball one billion feet, where would this ball land? Am I safe? Would this cause some sort of international incident? Because I was bored and take things way too literally, I decided to investigate.

Last night’s game between the Kansas City Royals and the Atlanta Braves took place at Turner Field in Atlanta, Georgia. A quick check of Google Satellite view tells me that the ballpark is orientated in a northeastern direction, turned slightly more toward north. This means that a ball hit toward where a left fielder would traditionally play would be headed almost directly north. Although Mr. Upton pulled his home run last night a little more than that, for the purpose of this exercise we are going to say he hit it directly over Alex Gordon’s head. 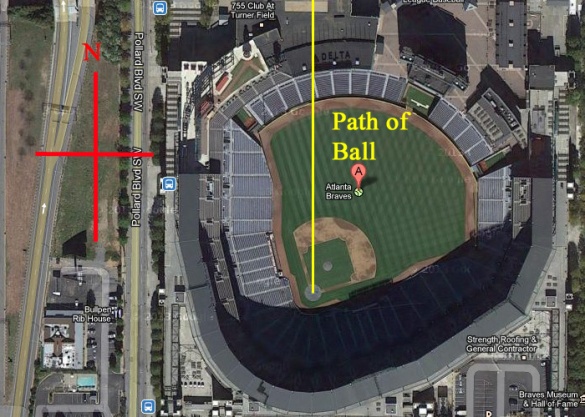 Before we try to pinpoint where this ball will land, we need to make a few assumptions. For one, this mammoth shot will have to be almost totally unaffected by the weather. Obviously, over the course of almost 190,000 miles, weather conditions could cause this ball to drop almost anywhere. Also, the angle at which this ball would leave the bat would not allow it to travel directly north. To make this easier, we’re going to say that as it left the ballpark, this ball would encounter a brief Atlantic breeze that would allow it to travel at a longitude of exactly 33.7352° N. This will be the only weather we encounter on the trip.

Now that we have a ball hit hard enough to travel one billion feet, and weather conditions that have allowed it to travel in a direct line, we can begin to pinpoint where this might land. To achieve the “189,394 miles traveled badge” on foursquare, Justin’s blast will have to circle the Earth 7.42 times. After reaching orbit because of science or whatever, the ball would presumably spend a few minutes zipping around globe, passing directly over home plate at Turner Field seven times before beginning its descent. As it crossed the dish at Turner for the seventh and final time, it will have traveled 174,020 miles of the required 189,394, meaning it still has 15,374 miles to go. Ruler time!

After using the distance scale on Google Satellite to add the additional 15,374 miles, we finally have a rough landing point. The lucky fan? Some sort of aquatic animal off the eastern coast of Peter I Island in Antarctica. A quick Wikipedia read tells us that Peter I is a dependency of Norway and has probably the most boring name ever. Before you book your next vacation, however, you should know that the island is 95% glacier and the most recent census found the population of the island to be exactly zero (leading me to believe that Norway sent a group of people to Antarctica to look at an island and go, “Nope. Nobody here”). As of 2005 it was estimated that fewer than 600 people had ever set foot on the island, so the chances that this historic blast by Justin Upton is ever seen again are probably a solid 0%.

If you’re one of the three people who clicked on this link, you obviously didn’t come this far to see this ball bounce off of a whale or something (or maybe you did?). No, we want contact with a human being! We want to read that some dude in China or Europe had a really bad morning when a leathery asteroid landed in his Frosted Flakes. Don’t worry, I’m prepared to deliver.

We’re going to use Turner Field as the launching pad for this second experiment as well. This time, however, instead of sending the ball north, we’re headed east. Now, Justin Upton is an incredible talent, and one of the most exciting players in the game to watch. But I cannot, in good conscience, believe that Justin can park a ball one billion feet the opposite way. No, for this exercise we need a lefty. But not just any lefty. We need a true masher. A lumberjack. A monster. We need: Matt Stairs.

An actual Google Image result for Matt Stairs. I did not edit this.

Now that we have our man, we need to establish some assumptions again. First, another look at the orientation of Turner Field shows that it would be pretty hard to hit a ball directly east, as that would result in a foul ball. So, let’s assume that Stairs hooks this ball around the right field foul pole, where it is soon thereafter straightened out by that Atlantic breeze, which puts it flatly on course at a latitude of 84.3896° W.

Again, this ball must travel 189,394 miles, which will require it to circle the Earth multiple times. BUT WAIT A MINUTE! Science tells me that the distance around the earth at the equator is actually greater than it is at the poles because SCIENCE. So now that the ball is headed east rather than north, it must travel 24,902 miles (rounded up) to circumnavigate the globe. Obviously, Atlanta isn’t located on the equator, and 84.3896° W doesn’t circle the Earth at its center, so this isn’t going to be all that accurate, but we’re talking about billion-foot home runs here so MOVING ON.

Back in Atlanta, Matt Stairs, who was just signed by the Braves at 45 years old, digs in to face Jeremy Guthrie. Guthrie, being Jeremy Guthrie, tries to sneak a low-90’s fastball right down the pipe past Stairs, who promptly puts it into orbit because SCIENCE. The ball takes off, and within a few minutes has circled the Earth seven times. At this point, the ball has roughly 15,080 miles left to travel before impact. Again, RULER TIME!

Again, the Google Satellite scale gives us a good idea of the area where this ball might land. In this case, it’s the North Pacific Ocean, somewhere northwest of Hawaii. Unlike our previous home run, however, this one should land in close proximity to a landmass with an actual population. The unsuspecting fan base? The 60 inhabitants of Midway Atoll.

This much warmer and far better named landing spot is an unincorporated territory of the United States, and former home to the Midway Naval Air Station. The Atoll was a focal point of the Battle of Midway, one of the most important battles of the Pacific Theater of WWII. If you’re keeping score at home, that’s Matt Stairs: 1, Justin Upton: 0 in the “Cool places to hit billion-foot home runs” derby. Because we didn’t come this far for nothing, we’re going to assume it made contact with a house.

So there we have it. While a billion-foot blast off the bat of Justin Upton would be pretty unspectacular as far as globe-circling home runs go, Matt Stairs would likely more than make up for it. Since nobody reading this is an Antarctic sea creature or a resident of Midway Atoll, you’re likely safe, and the spark that will start WWIII has been avoided for another day.